In better-for-you (BFY) circles, it’s not sexy to talk about marketing to the Baby Boomer generation: they seem too old, stuck in their ways, out of step with modern ideas. Instead, brands chase millennials — the on-the-go tastemakers who are all over Instagram — and Gen Zers, whose world views align with mission-driven BFY brands.

Each of these cohorts has distinctive demographic and psychographic characteristics. And growing a brand with a Gen Z or Millennials is tough, as they tend to be price sensitive and fickle. So are you missing out by overlooking Boomers? 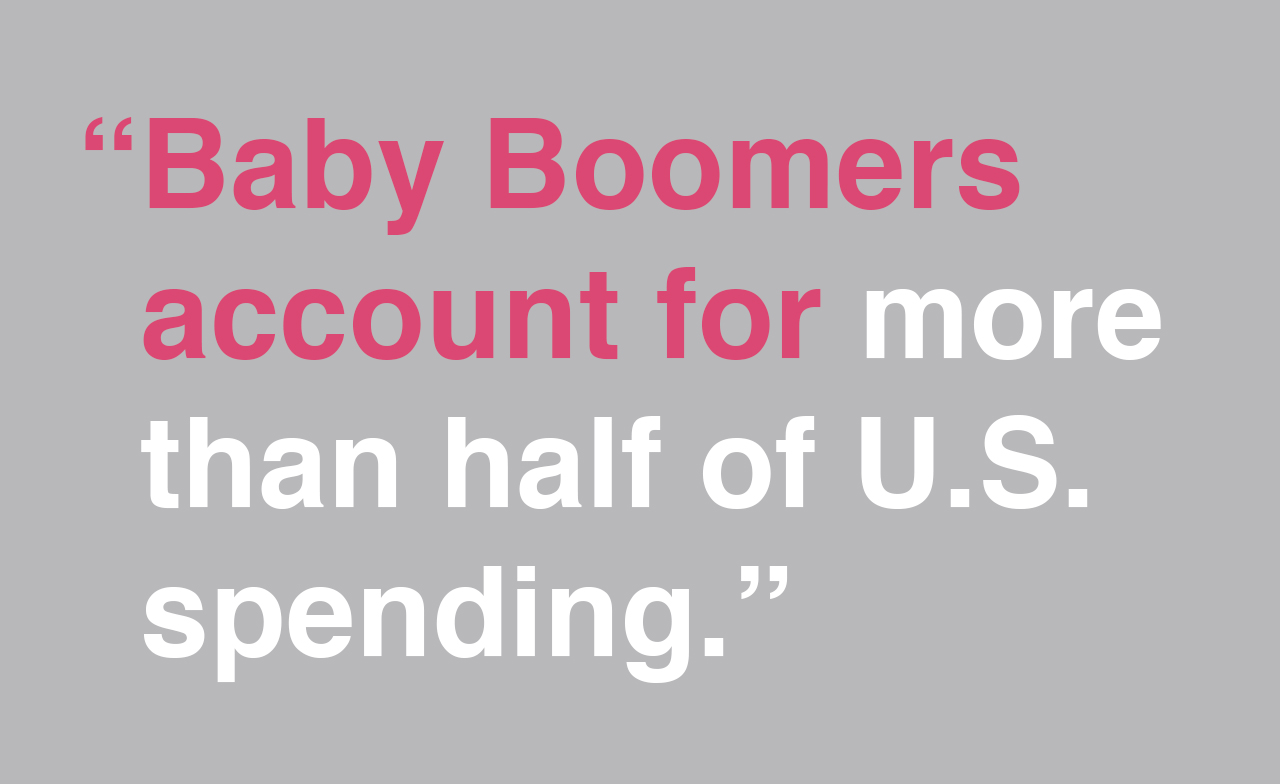 The “OK, Boomer” meme sparked by Gen Z to diss their elders might as well apply to marketers, too. Why do brands dismiss these consumers?

It’s human nature that we’re always looking for the new and next. In a business sense, marketers think they already understand all they need to know about the customers they’ve been talking to for years. And many companies mistakenly think that the path to growth moves beyond their current demographic into others.

In addition, millennials were just so difficult for marketers to figure out (in part because most of those marketers were likely Boomers themselves until fairly recently). Millennials are disillusioned and pessimistic: they came of age during an economic downturn and are overloaded in debt and technology. Marketers were initially taken aback by this cohort because they were so different, and it took so much research to understand them.

Here’s What Marketers Should Know About Boomers

Your brand may not be actively communicating with your existing Boomer audience, figuring you’ve already got them in the fold. Or you may not see them as a growth opportunity. Worse, your startup BFY brand may not be targeting them in any way, at all. We’d suggest that all of those strategies are misguided. Here’s what you need to know about this generation:

They’re not old. First, let’s remember who the Boomers are: Born between 1946 and 1964, the youngest of them are now in their mid to late 50s. They’re hardly old. The Greatest Generation was old at age 60; there’s a bias about Boomers—but they’re incredibly active, they’re big spenders, they’re traveling and going to the gym and even still working.

They’re the original “naturals.” Remember: Boomers launched the conscious consumerism movement in the 1950s and ’60s. At that time, teens and young adults were concerned about pesticides, animal welfare, and Big Ag. They read “Silent Spring” and started the first natural foods co-op stores. They embraced whole foods and vegetarianism. Their children, the millennials, took the movement mainstream. But if you’re a BFY brand, Boomers are your first-line audience.

Boomers are redefining aging. Nutritional supplements, expensive skincare products, gym memberships, cosmetic procedures — Boomers are embracing everything at their disposal to look, feel, and behave like their younger selves. Just as they did in the 1960s, Boomers are disrupting culture; this time, they’re disrupting age. They’re reinventing their lives so they can live another 30, 40, or 50 years on their own terms.

They are big spenders. Baby Boomers account for more than half of U.S. spending. They take between four and five leisure trips a year. They’re renovating the family home or furnishing new downsized condos. In addition to spending on health and wellness products, they’re big snackers — as empty-nesters or solos, they don’t prepare big dinners at home anymore and tend instead to snack heavily.

They value experiences. Boomers favor brands that deliver great experiences that align with their interests. And they’re willing to pay a premium for products that deliver.

Finally, Boomers behave like younger consumers do — more than you may think. The difference is that they’re not building the platform they’re going to live their life on; they’re looking to optimize the lives they’ve built. Boomers are influenced by the younger generations of their kids’ and grandkids’ age. They’ll bring home those products their kids and grandkids like, and then they’ll sample and adopt those products. Too, Boomers behave more like Gen Z on social media: They’re more plugged in because they have time, but their preference for personal interaction vs. digital mirrors Gen Z’s habits.

How to Market to Boomers

As with any demographic, you need to understand how to talk to and persuade Boomers. Here are some smart tactics:

Remember: Boomers aren’t going anywhere anytime soon. They represent 20 to 30 more years of sales for brands that can catch their attention and stroke their youthful egos. Does your brand need to take another look at your target audience? Let’s Chat.